Why have I never written about Cascade of Mares? The painting is simple: Three Arabian mares of different colors scamper vertically down the canvas. END_OF_DOCUMENT_TOKEN_TO_BE_REPLACED

Hello again! This is my first ever comic artwork. It’s a style I’ve wanted to try for a while because I have so many ideas that are a little bit more complex than can be expressed in a single, detailed artwork. END_OF_DOCUMENT_TOKEN_TO_BE_REPLACED

The story of the three cows is one that is very dear to my heart. It started earlier this year when I decided to join a fundraiser project for Happily Ever Esther Farm Sanctuary. The farm is a sanctuary for farm animals in Ontario, Canada. The farm is run by two wonderful young men, Steve and Derek, and is named after its most famous, most fabulous, and first resident, Esther the Wonder Pig.

The goal of the project was simple: each artist would select one of the many photographs of animal residents of the farm, produce their own artistic rendering of the photo, and sell it, with proceeds going to support the farm. Of all the photos to choose from, the one of the three cows walking home in the frigid sunset spoke to me the most.

Work began on the painting. Sketching out the scene, working out the intricate branches, and putting the first washes of color on the paper. And, as work began, work got delayed. The demands of Life got in the way, and painting projects got put on hold for weeks at a time. However, whenever the Cows came out, with every layer that was added, I fell more in love with the mood of the painting.

As summer drew to a close, another hurdle appeared; I had intended to enter my Cows into the Saxonburg Fine Arts Show as an entry to the theme of 2016, domestic animals. As I crunched to finish the painting before my September deadline, I came to the realization that I would never be able to sell this painting. Of course, this put me at odds with my commitment to sell it as the condition of my permission to use the photo. I decided on a compromise: I would hold on to the original forever. However, any earnings from products featuring the image would instead be donated to the farm. I think this may be better than the original plan because now the picture can be enjoyed by more people, and there is no limit to the amount of funds that can be raised. If you like this picture, and you would like to support the animals at Happily Ever Esther Farm Sanctuary, I encourage you to browse the products featuring them on Society6.com. There are products available that fit every budget, from notebooks and mugs, to duvet covers and large canvas prints! I, for one, know I will never tire of seeing my Cows.

And of course, you can donate to them directly on their website as well!

Prints and other products featuring “Three Cows” are available at Society6.com.

Happy Thanksgiving everyone! I hope everyone has a safe and wonderful holiday. However, after today, the countdown to Christmas begins in earnest! If you’ll be sending cards to your loved ones this year, how about something a little more unique? Head over to my shop: https://society6.com/laurelanneequineart/cards where I have these designs, and many more, for sale in packs of three, five, or ten. Starting today at 1:00 PM PST and through 11/28 11:59 PM PST, these and all my products will be 20% off AND feature free shipping! Don’t miss this opportunity to give your friends and family a gift they’ll truly treasure this season, and follow me on Facebook and laurelanneequineart.com to stay on top of all my newest artwork! Cheers, and happy holidays! 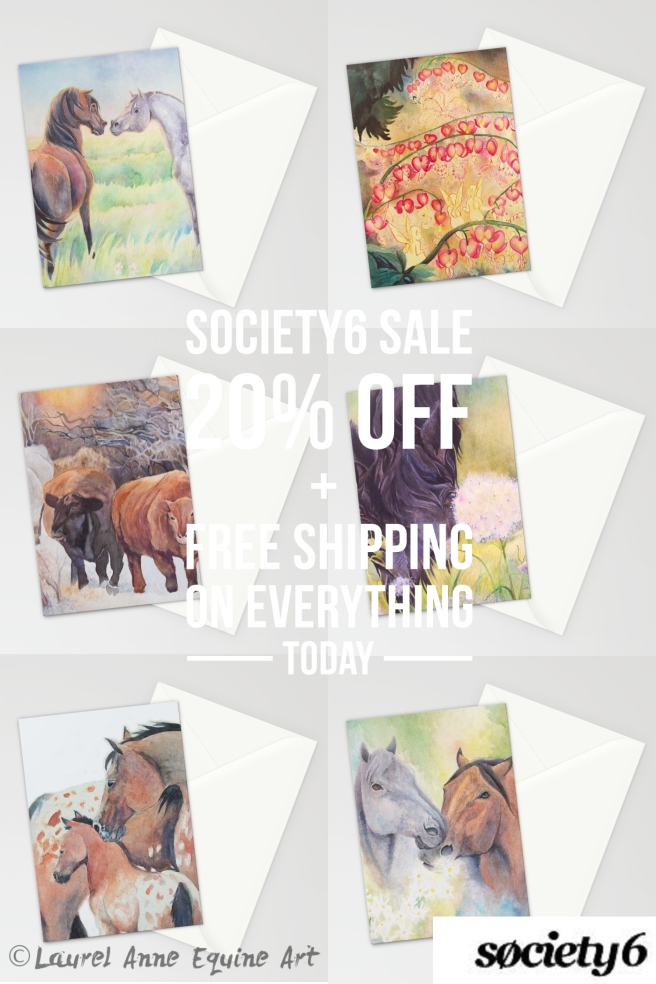 Way too long since my last post, and way too long to upload this picture! This painting was  inspired by midsummer; tall grasses, butterflies, and blooming Queen Anne’s Lace. I named it “Peek A Boo” due to the black Percheron filly peeking through the tall grasses. This filly is Ivy, one of the horses at my barn. I took the reference photo of her for this painting when she was two years old and a very tall, very heavy toddler. Sitting on the ground under a tree, the curious young horse came to investigate, sniffing my shoes, providing the perfect opportunity to snap some shots!

The original painting of “Peek A Boo” is not for sale at this time, however, prints and products featuring the artwork are available at Society6.com 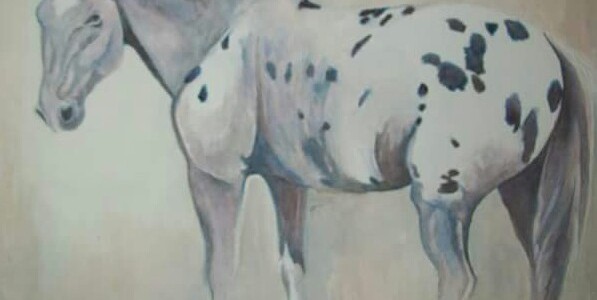 If you follow this blog or found it recently, you’ve probably noticed that it hasn’t been updated for a while. 5 months is the longest stretch between posts so far, but I haven’t given up this project! Where have I been these past months? Well, a lot of places actually. I’ve learned a new job, swam in some rivers, caught a bunch of pokemon (“- -),  sweated my body weight off ( twice!) and actually finished a few new paintings! I’m looking forward to recommiting to this blog, which represents a lot of my deepest loves in life. So if you haven’t moved on yet, please continue to stay tuned for new posts (and if you haven’t subscribed to my email list or Facebook it’s highly recommended!)

There are two previous entries in this series:

Click here for the first entry in The Pony Set series

“Pony Kiss” is the second painting in The Pony Set. After painting “Three Musketeers” I felt like going for a simpler color scheme and to feature some horse colors that didn’t make it into the first picture. The result is a dapper (can shaggy ponies be dapper? I think so) black pony and his snowy-white girlfriend. Fun aside: the white pony’s expression is based on Libby, the queenliest mare at our barn.

I probably should have posted about this piece of art ages ago, considering it’s the profile pic for my Facebook page and all, but… here we go. Way back when in 2014, END_OF_DOCUMENT_TOKEN_TO_BE_REPLACED

Good evening, long time no post! Back on 8th February we ushered in the Lunar Year of the Monkey. Scrolling through pictures of flowers with Chinese New Year on the brain, I couldn’t help but notice how much bleeding-heart flowers (dicentra) look like Chinese lanterns. The vision of the little flowers glowing in the night made me think of the tiny garden people that would live under those flowers, the faeries. After setting up the flowers as the framework of the scene, I added little faerie magic fireworks and ribbon dancers to add to the festivity.

Faerie Lunar New Year is available as prints and other products at Society6.com!

Find Us On Social Media!